Skip to content
Tweets by gregotrading
Tweets by realDonaldTrump

Next Generation of Gaming: Microsoft Vs. Sony

The world of gaming is about to change with the next generation of consoles preparing to ship next month. Microsoft (MSFT) and Sony (SNE) have been battling it out for the best-in-class gaming system since the first Xbox hit the consumer market's holiday season 2001. Now the 2020 holiday season is approaching, and the next-gen gaming battle is about to commence.

Gaming makes up only a portion of the technology giants' total business, but this new wave of systems should give each of these companies a sizable revenue boost. Sony's gaming segment is a much larger portion of its revenue than Microsoft's Xbox. PS5's performance will likely have a more pronounced price action on SNE.

Each device's various subscription services will allow the initial console sales to pay dividends to the brands in the years to follow.

The PS5 and Xbox Series X will be priced at the same $500 price point, and both will offer less expensive models: Xbox Series S at $300, and the PS5 Digital Edition at $500. The specs of each of the premier models will also be almost identical with the same AMD CPU and GPU and resolution up to 8K.

The decision of which consoles to chose will be driven by brand loyalty and game selection. The exclusive game releases will be a critical component when a consumer is deciding between the two consoles.

Microsoft has been making moves in preparation for its Series X launch with the acquisition of Bethesda Software and partnership with GameStop (GME), all occurring in the past 3 weeks.

Microsoft's acquisition of Bethesda was huge for its upcoming console release as it gives the enterprise exclusive rights to some of the most beloved video game series with massive cult followings. Bethesda's Fallout series brings in millions of gamers with every new release, and its Elder Scrolls series is even bigger, with Skyrim selling over 30 million copies.

The Halo franchise has been massive for Xbox and could be another deciding factor for which console to purchase.

Microsoft announced yesterday that it would be entering a multi-year partnership with GameStop to "advance GameStop's key strategic pillars and extend its digital omni-channel ecosystem," according to the press release. GME shares boomed on this new, ripping from below to $10 per share to the $14.50 it hit today, driving up over 50% in only 24 hours as GameStop investor sees a glimmer of hope for this victim of the retail apocalypse. MSFT was more or less unaffected by this news as its shares track with the broader market.

Sony and its PlayStation brand were the pioneers of modern gaming consoles, launching the original PlayStation in 1994 and it was an enormous success, selling 104 million units in its 12-year life span. The PS2, which was released less than 6 years later, sold more than 155 million units and remains today the best-selling gaming console of all-time.

Sony has consistently outplaced Microsoft in console units sold for every prior system. Analysts estimate that the current global brand loyalty will sustain, and the PS5 will outperform the Xbox Series X/S. However, they do concede that Microsoft is better prepared than ever to compete with Sony.

According to Ampere Analysis, the PS5 will sell 5 million units, which they estimate will be 1.1 million more than the Xbox X/S's 3.9 million units in 2020. You can see the 4-year sales outlook for each of these devices in Ampere's graphic below. 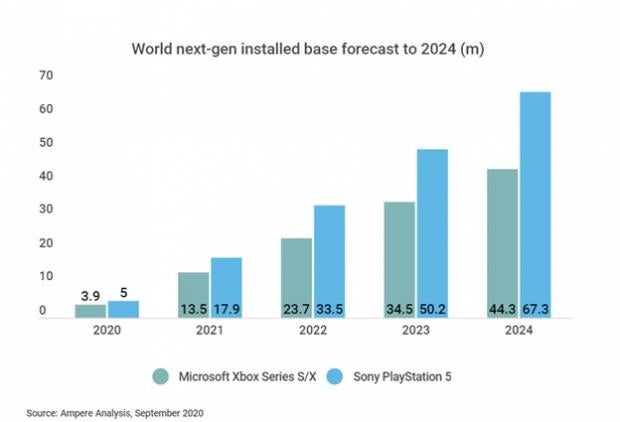 Sony shares are well-positioned for a buy today. This enterprise destroyed earnings estimate in its fiscal Q1 quarter (June quarter), with the pandemic having mixed impacts on the company's operations.

Gaming & Network Services, which made up most of its profitability this past quarter, experienced a massive uptick with the pandemic providing the segment with a sizable tailwind. G&NS sales and profits were up by 25% and 40%, respectively.

Some of Sony's other business segments saw some headwinds like Pictures and Music with the pandemic negatively impacting video production, ticket sales, and live concerts. Its Electronics Products & Solutions segment is also experiencing a decline this year. These division's underperformance should reverse as the global economy recovers.

With the PS5 on the horizon, I think the Gaming & Network Segment is poised to explode. This next-generation console release couldn't have come at a better time as more people than ever have picked up the controller in this "stay at home" environment.

I don't believe that SNE shares have fully reflected the business's true potential. 6 out of 6 analysts are calling this a strong buy, with an average price target of $105, representing a 40% increase from where it's trading today.

From the TradingView chart below, you can see that these shares are bouncing off a support level at its February highs of around $74. I purchased some shares today on this stock bounce as I see this as an excellent entry point.

I think both MSFT and SNE are excellent long-term buys. These two digitally-driven conglomerates are poised to thrive in the Roaring 20s. Gaming is more prominent than ever, and these next-generation consoles should see significant demand this holiday season and better compete against the growing threat of PC gaming.

Experts extracted 7 stocks from the list of 220 Zacks Rank #1 Strong Buys that has beaten the market more than 2X over with a stunning average gain of +24.3% per year.

These 7 were selected because of their superior potential for immediate breakout.

Want the latest recommendations from Zacks Investment Research? Today, you can download 7 Best Stocks for the Next 30 Days. Click to get this free report